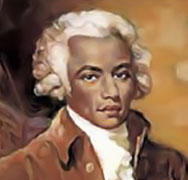 1745-1799 — Saint-George is known today as one of the major early contributors of African descent in the tradition of European classical music. He gained fame as a violinist, conductor, and composer; some of Europe's top composers created violin works with Saint-George in mind as the soloist, and he led the premieres of some of Franz Joseph Haydn's greatest symphonies. He was also a champion fencer, becoming a musketeer at one point and early supporter of racial equality in France and England.

Chevalier de Saint-Georges was an Afro –French composer, born in Guadeloupe was later taken to France by his French aristocrat father. Receiving the training afforded the aristocracy, he became a skilled violinist, composer and fencer. A contemporary of W.A. Mozart, Haydn., he became so well established as a composer, soloist and orchestra director, he was considered for director of the Royal Academy of Music. The orchestra which he founded, Concert de la Loge Olympique was the group that Haydn was commissioned to compose his Paris Symphonies. He composed over fifty quartets, concertos, and symphonies. He is said to have had an influence on Mozart as well.
share this page...